Temple of Boom opens at National Gallery of Victoria


Kelvin Tsang and Adam Newman’s Temple of Boom has opened to the public in the garden of the National Gallery of Victoria.

The seventh architecture commission for the NGV, the installation reinterprets a 2,500-year-old temple that has come to represent an enduring symbol of democracy and western civilization as one of the most recognizable buildings in the world.

NWMN director Adam Newman said 1:3 scale recreation the original structure, Temple of Boom, is “not a replica” but a reinterpretation of the structure with some key differences.

“It is intended to be an abstraction, a reimagining that evokes the resonant form of the temple,” he said. “The key distinctions lie in the urban art aspect of the scheme and its translocation to the Melbourne skyline.” The installation also doubles as a canvas for street art and a live performance venue, reimagining the Classical Greek icon with bold murals, a contemporary Athena, and an injection of new life.

Built as a modular structure, the installation can be decommissioned and rebuilt with ease, and Newman hopes this will enable the structure to be redeployed to another location after its time at the NGV is complete.

The entablature and pediments are made from structural timber box beams, while the columns, each weighing 350 kilograms, are made from glass-reinforced concrete. The architects faced significant structural challenges building above the NGV’s loading dock, requiring they spread the load of the structure evenly across the surface of the Grollo Equiset Garden.

Temple of Boom has been built over the top of the previous commission, using the base of the pink pool from Pond[e]r as a plinth for the temple. Newman said the installation can be seen as commentary for how architecture is constantly evolving and forever building upon its predecessors.

“Conceptually, it’s about the notion of transformation over time of all built form, particularly through the forces of degeneration, regeneration and accretion,” said Newman. “But the utilization of existing form, and by extension, the minimization of demolition, is a key part of our approach to architectural practice.”

“The Parthenon is a highly symbolic and culturally, historically, and politically loaded structure, with many stories to tell. We have endeavoured to promote conversations through the commission, about what lessons it may hold for our future.”

The installation has been painted with overlapping large-scale artworks by three local artists, Drez, Manda Lane and David Lee Pereira. A second and third round of artists will also add their flourishes in early 2023.

“The original form of the Parthenon was a highly embellished and colourfully painted edifice, and the artists are working with that notion in mind,” said Newman. 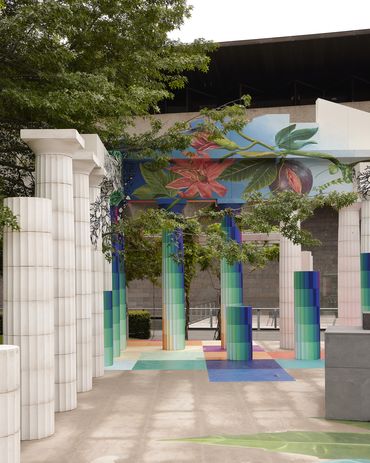 The themes explored by the first three artists include the interactions of the natural and man-made worlds, while gender and sexual identity have been depicted in the potent, yonic symbols of fruit and floral motifs.

Henry Moore’s Draped Seated Woman sculpture has been reinstated at the centre of the commission, like the goddess Athena, to whom the Greek temple had been dedicated in the fifth century BC.

Temple of Boom is on display at the NGV International now until August 2023.