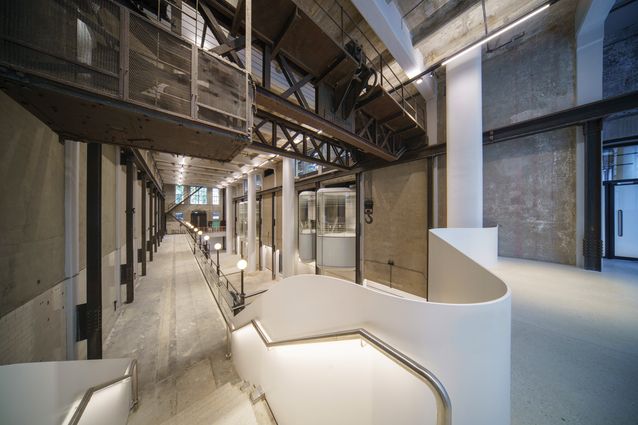 Pathway to a dense, historic and beautiful city: Substation 164


Glancing skyward from the dense nineteenth-century streetscape of brick warehouses that characterizes the western edge of Sydney’s CBD, one is struck by a gorgeously curvaceous new glazed addition that appears to float above a pair of heritage structures. It presents as a modern genie escaping the bottle of history, perhaps to grant us three wishes.

So, what are the three wishes that this project promises? The first is a dense and compact future city that builds sustainably on existing infrastructure. The second is a kind city that respects heritage and minimizes impact on existing urban fabric. And the third is a beautiful city where modernism and heritage coexist, with each heightening the beauty of the other.

The site consists of two separate brick structures: a warehouse with timber-framed floors and an abandoned substation with concrete floors. The seven-storey Shelley Warehouse at 185 Clarence Street was constructed to the plans of Arthur F. Pritchard in 1909. The adjoining site at 183 Clarence Street remained undeveloped until 1924, when it was resumed by the Electricity Department of the City of Sydney and plans were drawn up by the city architect, Robert H. Brodrick, for a substation. The five-storey substation, which included a two-storey machine hall, remained operational until 1985.

In 2017, the two sites were purchased by construction company Built, which planned to house its headquarters there. The company held a limited competition to select an architect. FJMT Studio’s winning concept, based on reverence and respect for the historic fabric, seemingly floats a curvaceous glass object above the earthbound rectilinear brick buildings. Continuing the architect’s exploration from UTS Central (see Architecture Australia , May/June 2020), the building is wrapped in white glass, contrasting with the tactility of the brick below and appearing to melt into the air above. So successful is the project’s sculpting – particularly its soffit, which curves in under the building – that it is hard to conceive that eight additional floors have been added, more than doubling the height of the original buildings.

In additional to the sculptural relationship between old and new, FJMT minimized the impact of the new structure on the heritage fabric through innovative engineering. The entire structure is precariously balanced on a small lift core and four columns that penetrate through the existing buildings. White curved elements reference the architectural expression of the new structure and demarcate it from the existing building. Above the heritage element, a lightweight steel structure inclines outward to support larger floors. Within the new building, the steel structure is clearly expressed, with its bolted connections recalling nineteenth-century steel detailing. Steel beams cantilever the floors beyond the outermost columns, maximizing the sense of weightlessness. The ubiquitous office building ceiling tiles have been excluded to express the steel, minimize unnecessary materials and reduce embodied carbon.

The new structure is wrapped in a sinuous skin of seamless glazed curtain walling that uses some of the most sophisticated glass technology available. On the lower-floor panels, which curve in under the building, the glass curves in two directions, creating a seamless fluidity that emphasizes the structure’s apparent buoyancy. In addition, all glass panels have a linear translucent ceramic frit pattern that provides solar control while uniting the new form into a singular, seamless volume.

In the recess between the new and old structures, on top of the heritage buildings, is a two-storey roof garden where landscaping creates a highly habitable space from which to enjoy the urbanity of a vibrant, dense city. From here, the soffit of the diaphanous structure above is experienced as a hovering cloud.

The ground-floor lobby is entered through a new curvaceous portal inserted into the heritage warehouse facade. A cafe has been incorporated en route to the lift core. A series of curved glass bay windows cantilever out into the adjoining two-storey Machine Hall, creating a dramatic location (“pod”) to sit and vicariously participate in the activity of two spaces simultaneously. The Machine Hall is required by a planning agreement to be an exhibition space, with an operator responsible for ongoing curation of arts and cultural events. The potential of this space as a major events venue, once the fitout is complete, is exciting and highly commended.

The heritage floors are divided into two by the party wall, which creates long, narrow floors with framed windows on the short ends. The small quantities of glazing minimize the heat load, allowing for the use of an energy-efficient chilled-beam system. Clever interior layouts maintain a connection to natural light. The substation incorporated a ventilation shaft for machinery between it and the adjoining 185 Clarence Street; this interstitial space has been glazed to create a vertical void that is used to reticulate services and to provide visual connectivity between floors.

The two heritage structures have been integrated by opening up the brick arches of the party wall to create united office floors. The difference between floor levels in the two buildings has been deftly resolved by the interior designer’s use of ramps and small interconnecting stairs that, ironically, make the floors appear more connected through their partial offsets. Built’s offices, located on the heritage floors with interior design also by FJMT, showcase a large number of sustainable features, including ventilated green walls, moss gardens, recycled materials, circadian lighting and reused furniture, enabling it to achieve 6-star Green Star and WELL Platinum ratings – the highest standards available.

Design decisions throughout the project were focused on sustainability and carbon reduction. It is estimated that reusing the existing heritage structure created a 24 percent reduction in embodied carbon compared to a new building. The base building has 5-star Green Star and 5-star NABERS ratings, and incorporates 100 percent fresh air cycles, low-emission materials, LED lighting, touchless and water-efficient bathrooms, and bike racks and end-of-trip facilities to encourage low-carbon transport options. Built also diverted 90 percent of construction waste away from landfill. The construction company estimates that these decisions have resulted in a 28 percent reduction in greenhouse gas emissions over the building’s lifetime.

As our global population continues to grow, the most sustainable way to expand cities is to densify and utilize existing infrastructure. However, the drive toward compact, dense cities is often in opposition to the retention of heritage buildings – itself an inherently sustainable strategy. Substation 164 offers a highly sustainable pathway forward without compromising heritage, density or beauty. Our three wishes are granted!

One final wish is that the leadership in design aspiration, construction quality and sustainability initiatives demonstrated by Built in the planning of its own headquarters will become the new normal for the industry. Sadly, the genie can grant only three wishes.

It’s not complicated: Sustainability in conservation and adaptation

I am really dying to know. : architecture

Avery Thatcher Answers “What Should We Put on Our Walls?”